This week, we've been focusing on polish as much as possible. We wrapped up the custom AI for our next boss fight as well as the special spells the boss will be using, but we're still waiting on the graphical assets for the boss, so not much to show yet (also, I'm not sure we should showcase our bosses, so they're a surprising when you get to them in game!).

Otherwise, we've finished revamping all the shops, including adding the proper shopkeeper sprites (those came mostly from our Mercantile Backer tier on Kickstarter and are looking pretty great!) and their portraits. We've also started on a big pass on all loot, drops, treasures and crafting items, to make sure the progression/balance is solid. I've been spending more time buried in excel sheets than programming this week.

Oh and we added many sounds to the game. So many new sounds. And yet, so many more left to go!

A surprisingly high number of fans have been requesting it, so we've been seriously considering going into Steam Early Access fairly soon. It's not 100% decided yet, but I'd say it's looking like a real possibility. Which is one of the reasons we've been focusing on this big polish/balance update.

On the art side, we have a new regular monster ready, as well as a 'mini-boss' type of monster, created for an encounter designed by one of our backers. Here's what they looking like:

The Zotzit is a quick and deadly enemy!

This ghostly lady is going to be one rough secret encounter!

We have some new maps in the works (not quite ready yet) as well as as some new concept art for a map: 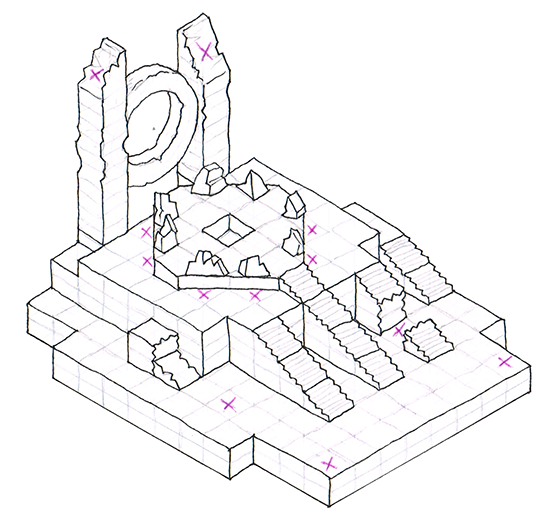 This map is set on a nexus of power in the land. Let's just say powerful things might appear there. Things that might not always be friendly ;)

>This week, we've been focusing on polish as much as possible.