Our latest build (you can check the notes right here) takes the story almost to the final battle, so most of the core content is ready!

We're mainly missing optional content, in the form of 4 special battles, a few cutscenes, a secret character, another Tournament, some secret loot and enemies and a special 7 maps end-game dungeon.

Well, I guess that's quite a bit of content that's still missing, come to think of it!

All the maps and the design for the above content are ready and we're missing the cutscenes and the encounters for most of them. We're working on it though and we're on schedule. There certainly won't be any vacation for us for the next 2 months though!

This week we've been working on wrapping up today's build and creating cutscenes and encounters mainly. We also spent time integrating new SFX and VFX to the game.

Lastly, we spent time creating the credits section and it should be ready for the next build.

We're hoping to be done with all cutscenes late next week as well, and everything that isn't optional content should also be done.

We should also receive the final batch of localized text next week (we're missing a few tutorial toolitps, some abilities and some later cutscenes mostly), which should make the game fully localized in all launch-languages at that point (and we'll update our Steam supported languages to reflect that).

And here's another image from our digital art book/manual: 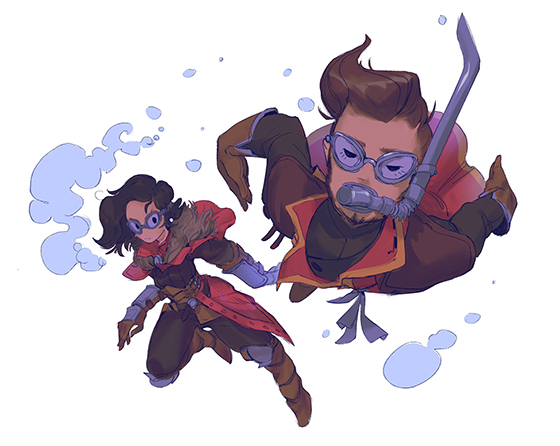