Lots of story related work this week, including special sprites and new cutscenes. A lot of those would entail major spoilers, so I'm going to focus on the safe stuff for images :)

On the art side, we have a new monster, a friendly looking zombie. Fell Seal isn't too rife with undeads in general, but we do have a few, including this guy:

He should be appearing in the next Beta build that should be coming out next week.

We also have the preliminary sprite for another story character, although we only have her basic look ready: 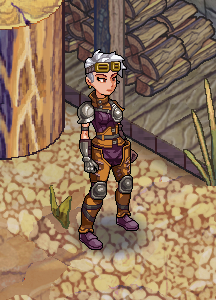 On the code side, we've been spending more time tuning and improving the AI and fixing a lot of small issues with it.

We've also added a few more bells and whistles to the UI yet again (including the exact damage numbers for most abilities, as requested).

And we've cleaned up a lot of the counters in the game to be a bit cleaner on what they proc/don't proc from.

We're also working on new story cutscenes and we're hoping to have 3 new maps for the next build.

Lastly, one of our biggest changes on the code side is that we've added a system to make every single patrol in the game (our version of "random encounters") fully tunable in a new file (encounters.txt).

Modders should be easily able to replace a map's patrol with their own, spawning any enemy, with any class, gear, skills, etc they want. And it should be very easy to use too. All of the game's non-story encounters have been converted to this new system and are bundled with the game, so it's easy to see how they were created and even modify/replace them fully.

Here's an example of a patrol in the game, to show how simple it can be to create:

This would create a patrol in The Crossroads, and specify the ally spawn point and starting direction. Then it specifies 2 monsters and 4 human opponents and that's it. In this case, the game logic will set their exact class and items as appropriate from the player level and story completion, since it is not specified for most of them.